M.V. Falmouth Bay, on passage from Busan to Los Angeles via Tsugaru Strait.

Weather routed by a company named "Ocean Routes" (we refered to them as "Ocean Fruits", that is how much faith we had in them), we had to follow their advice even though onboard information indicated severe problems but what did we know, someone had probably paid thousands of dollars for this service so it had to be right, right?

Weather routing was the 'In Thing' like climate change today and although they were thousands of miles away, their computer generated models were infallible.
Things don't change much, do they?

Hurricane force winds were reported East of Japan, weather fax surface pressure charts showed this to be true but the vessel being weather routed, there was no choice but to follow the directions of the weather routing company. The results of this guidance can be read in thie extract from the Official Log Book.

There is no way that I can diminish the role played by the navigating and engineering deparments, most certainly the initial actions of the electrical department were pivotal, communication was lost and my roll was minimal until communication was resumed.

Salt spray on the aerial insulators prevented loading of the antennae from the emergency transmitter using 500kHz. and although the lights from a vessel where visible at that time, no reply was received even using channel 16 vhf.

Eventually, when mains power was restored, Choshi Radio,(JCS) Japan, was contacted on 8364kHz by repeatedly sending "JCS SOS" and listening for the corresponding reply "DE", a little unorthodox but desperate times, desperate measures. Communication continued with Choshi Radio throughout on 8MHz.

We eventually contacted a Japanese container ship "Shimbei Shu Maru" which stood by us for some time and relayed messages to UK via Sat.

Co-incidentally, three nights earlier I'd had a dream not dissimilar to evolving events which I related to the ship's Master. During the height of the incident a comment was heard "Sparks, you and your f***ing dreams".

Thats how it was, a dificult situation was coped with. No counselors, no compensation, no regrets. A lot remains untold, as it should be.

It is rumoured that this was the last occasion that a distress message was sent from a British merchant ship.

Mangled containers on the foredeck.

Approximately one hundred and twenty containers went over the side and about eighty smashed on deck.

MV Falmouth Bay last weather report before the incident, the weather just got worse.
Could have been the last message I sent. 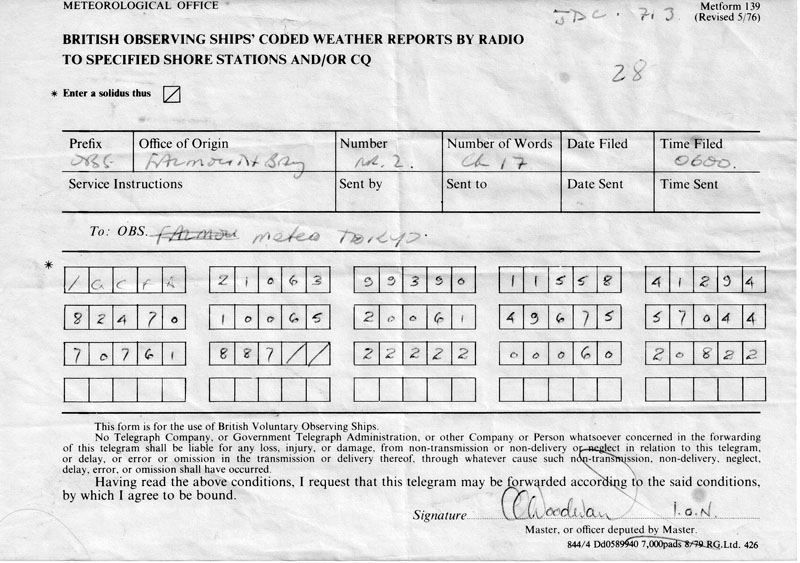